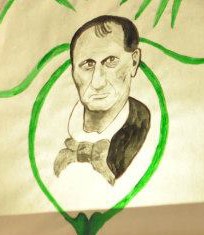 Because he would be so irritated. Because he might be charmed. Because the synesthetic imagery of his poems lend themselves so singularly to the conjoined media of scrolled paintings unfurling to music. Live music, it is important to add. There is a touch of vaudeville and cabaret in Baudelaire. He tended to go big or go home. Home to his mother.

Because he invented the term “modernity” and even now no one quite knows what it means. Because he wrote a poetry of immersion perfectly suited to the transience and Now-ness of song and of the Ever-Moving scroll. Because we never had a proper goth phase. Sex and death! For all these reasons, and for the true one that remains just out of our grasp.

For this project there could be no other.

BAUDELAIRE IN A BOX
is a production of